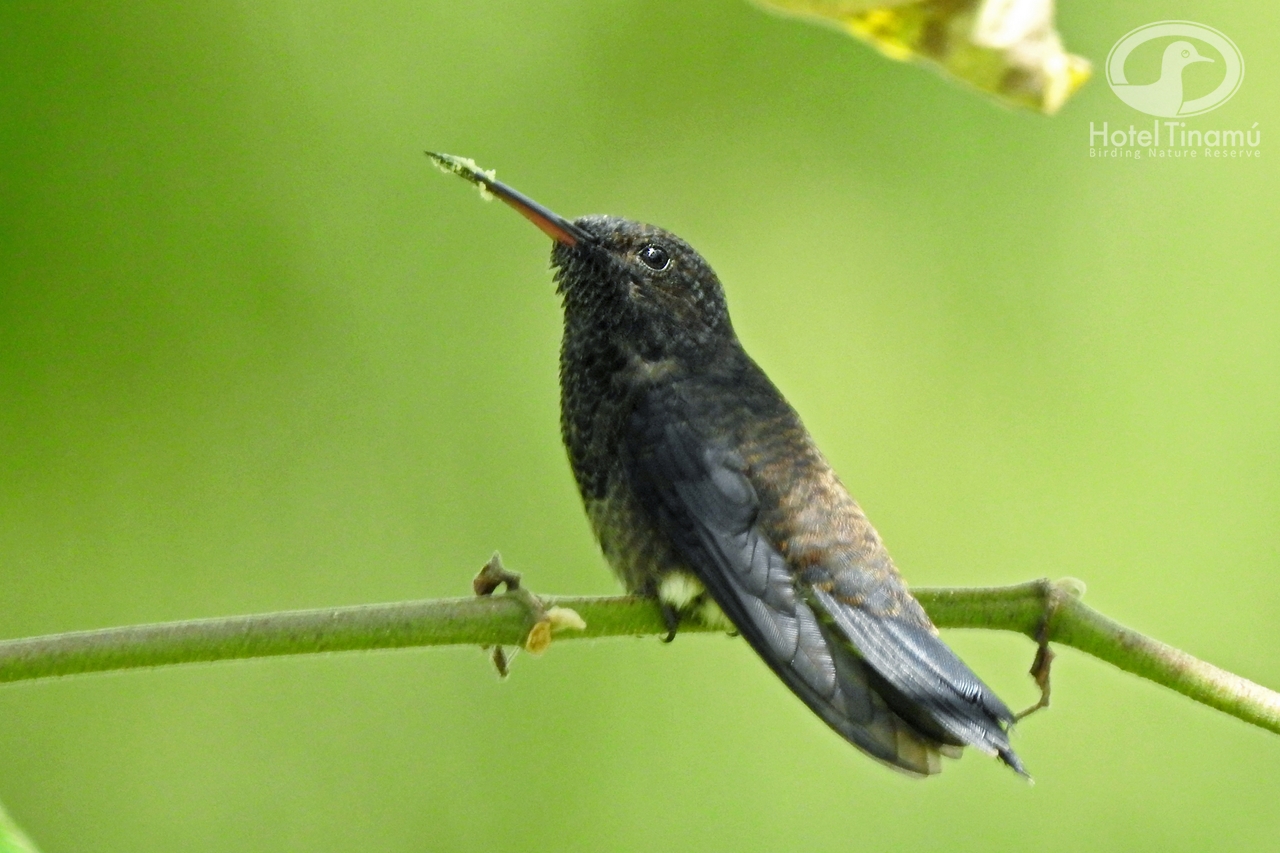 Melanic Steely-vented Hummingbird, a special registry in Caldas and Colombia

The Steely-vented Hummingbird, is a very bright emerald green hummingbird with a dark blue tail and a bronze border on the upper caudals (lower part of the rump), which lives in Nicaragua and Costa Rica, In the Andes of Venezuela and the Sierra de Perija; And in Colombia in the Sierra de Santa Marta and the Cordillera Central. In its distribution range, the Amazilia Coliazul frequents the banks of forests, dry scrub, underbrush or even gardens and crops. Although they get up to 2200 m.a.s.l., they are more common until 1800 m.a.s.l.

These small jewels of nature in spite of their size, are very territorial and aggressive with other hummingbirds, actively taking care of the flowers of its territory. Behavior that is very common in other species of hummingbirds, as in all species of birds that are territorial, that is to say that establish a determined area to feed and raise their offspring.

Usually this species of hummingbird can be seen alone or in pairs, however and despite its aggressive behavior, in some cases, when the availability of food is much higher than the demand can be seen many of them together, as is the case Of the time of the flowering of some trees in the forest.

Very close to the city of Manizales, in the Coffee Highway towards Chinchiná or Medellín, in the Vereda San Peregrino, is the Natural Reserve Hotel Tinamú, where you can observe about 16 species of hummingbirds in which this beautiful Steely-vented Hummingbird. Thanks to the availability of permanent food in the libraries for hummingbirds and flowers, the population of Amazilia saucerrottei is very numerous, being perhaps the most predominant species in the beautiful Gardens of this Oasis for birds.

And it is precisely there where we can see an individual of this species that stands out among the others. The first in his class photographed and reported in Colombia: A melanic Steely-vented Hummingbird.

To understand a little more about a melanic specimen, I would like to briefly explain how the physical structure of the color of the feathers, specifically the hummingbirds, is composed. (Fig. A)

Most of the colors we see in birds, are produced by the combination of pigments deposited in the pen. However, in many cases the pigments alone are not responsible for some colors in the birds.

To get these colors and that iridescent glow so unique, hummingbird feathers have developed structural changes that alter the property of reflecting light. The pigment melanin, is the structural element responsible for the metallic iridescent color of the hummingbirds. This pigment comes in the form of tiny flat platelets located and aligned in such a way that they can reflect and refract light by creating these shines, these platelets enclose a tiny bubble of air that acts as a prismatic one, fragmenting the colors of light and Reflecting some specific color on the surface of the pen.

Melanism is a mutation that manifests itself in an excess of the melanin pigment that produces a total darkening of the plumage. In the case of hummingbirds, it occurs when the number of platelets of the pigment melanin is much higher than normal, when this occurs, it fails to reflect or refract the light normally leaving only the color of the pigment (black) without creating the metallic brightness, No air bubbles are created between the platelets that fragment the colors of the light, leaving only the color of the physical structure (black). It is as if we had several pictures of mirrors overlapping each other, we could clearly see the reflection in them. But if in the same space we would locate many more pictures of mirrors we would only see the edges of them and they would not reflect anything.

Therefore, birds affected with melanism do not show iridescent glow in plumage since the arrangement and concentration of melanin platelets in the pen structure is much larger than normal and fails to reflect light or fragment it . This being the way to identify a melanic individual in hummingbirds, that is to say they have black and opaque feathers.

At present, very few records of melanics hummingbirds are known, but it is known that this mutation is more frequent in tropical hummingbird species. There are those who claim that permanent exposure to the sun could degrade pen quality and produce effects similar to melanism, however, the pen’s normal appearance is recovered by molting.

And since observing hummingbirds and photographing them can be a real challenge, birdwatchers or photographers often fail to identify the species with the mutation, thinking that perhaps it was against light or moved very fast or was in the shade And did not reflect its color.

As for the hummingbird found at the Hotel Tinamú, without a doubt is a case of melanism. The individual has an established territory which has allowed us to observe him daily from the day he was found. Giving us the opportunity to recognize important features of the characteristics of this mutation.

For the Tinamú Hotel, it is not only a pride to have this wonderful and unique specimen here, it is also one more reason to strengthen our commitment to the conservation and study of our biodiversity.