Variations, alterations of color and reproductive aspects of White-necked Jacobin

The White-necked Jacobin is one of those winged jewels that can be observed in the Tinamú Nature Reserve, along with some more species of hummingbirds, the Florisuga mellivora can be observed permanently in the livaderos of the reserve gardens, just as inside the Forest Coffee, this is one of the responsible for the pollination of coffee and other plants in our forest.

This beautiful creation of nature has a design of patterns and colors unique and unmistakable. Like many other birds, in this species of hummingbird we can see what is known as sexual dimorphism, meaning that male and female have completely different colors and color patterns, to the extent that males and females look like different species. The male has a hood that includes bright electric blue head, neck and chest, with a white crescent at the bottom of the nape, which gives it the name of collarejo; the back, rump, wing covers and central feathers of the tail, are iridescent green, and the abdomen, belly and rest of white tail immaculate. The beak and legs are black.

In the case of the female, in this particular species has a very wide color variation and is currently beginning to be studied and has produced many confusions.

Although most females have a recurring color pattern and may be considered the “normal” pattern and color, there is a percentage of them that have patterns that could range from completely uniform breasts where only the base color is shown on breasts thickly scaled and of course, a percentage of greater or lesser scaling in the chest. Also, there are females that have variations of the base color of the chest, that could go from a cream color cinnamon to immaculate white.

Similarly the green tone and the pattern of distribution of different shades of green varies between each copy. Some females may be a bluish emerald green, olive green or combinations of various shades of green.

However, the most impressive thing about the color variations of the White-necked Jacobin females is that a percentage of females can have the same plumage of the males.

In the same way that there are variations regarding color patterns and color tone in their more feminine form, when the color of males in females occurs, this could vary a lot as well. In some cases they have a female coloration on the body and tail, but have a blue head, or stained green and blue. That’s in the mildest cases, but they can go up to have the abdomen, belly and white glue dirty or immaculate, opaque blue head, which could be confused with a juvenile male. In most cases they present a clear cinnamon stain at the base of the beak, in the maxillary zone and may or may not go down the sides of the neck, likewise an uneven clear cinnamon stain from the upper back to the rump. This clear cinnamon stain in the maxillary zone is the way to identify females with extreme color alteration, another way of recognizing them is by the black end band in the tail, which is much thicker than in males. It is worth mentioning that these color patterns are never presented by juvenile males, these are characterized by leaving the nest with the same color pattern of an adult female but with very opaque colors and stained gray, as they change the plumage, the color of male goes out in an intercalated way, until they complete it at the end of the first molt. And the most extreme case of alteration of the color of the female is that it presents the color of the adult male, both in color patterns as in intensity.

When sexual dimorphism occurs in a species, it is assumed that the male’s attractive and showy color will help him succeed in transmitting his genes through reproduction. Similarly, the opaque, greenish, brownish, grayish color of females can be seen as a guarantee of success in reproduction, since these colors will allow them to camouflage themselves in the environment and to be able to incubate eggs and to breed pigeons, since they are polygamous and it is the males that defend their territories, the pigeons possess the colors and color patterns of the females, which allows them to walk through different territories without being attacked, until they reach their sexual maturity after finishing the first molt.

When extreme cases of color alteration occur in females of a species with sexual dimorphism, we do not know how to interpret them, and there seem to be no obvious reasons why these alterations occur in nature. It is also unclear whether these alterations may be transmissible genetically or whether temporary or permanent.

Many will wonder how to distinguish males from females with extreme color alteration. Well, in the case of females with slight alterations, they usually have these shingles on the sides of the face, and only a few have them on the sides of the neck and back, which juvenile males never present, cases of alteration of extreme color, the only way would be to get one of these females cast incubating eggs or copulating, although we remember that in the nature also occur cases of sexual alterations and we could see two males copulating.

In the Tinamú Nature Reserve, in Manizales Colombia, we recently reported the case of a Steely-vented Hummingbird, today we present a female White-necked Jacobin with extreme color alteration, which presents the coloration of adult male, in pattern of color and intensity.

To understand a little more what nature presents us in this case, let me extend a little in reproductive aspects of hummingbirds in general, and especially in Colibrí Collarejo.

Hummingbirds like many other groups of birds are polygamous, meaning that a male or female can copulate and reproduce with several individuals. However males tend to establish territories that strongly defended other males during the breeding season, so it could be assumed that a male who defends a territory could have several females. In some cases, species such as the Green Hermit Phaethornis guy make “lecks” where several males gather to perform prenuptial demonstrations and where the “alpha male” fertilizes several females.

During the breeding season it is the females that are responsible for the construction of the nest, depending on the species could be on a thin branch, on a leaf or even under heliconia leaves or bananas. And to different heights according to the species, some to few centimeters of the ground and others to heights greater than 15 meters of the ground. Females use a variety of nesting materials and the size, shape, and structure of the nest may vary widely among different species. Usually the nests are internally cup shaped and are made of vegetable matter that bind together with cobwebs and adorn on the outside with moss lichens, which gives them a camouflaged appearance. Hummingbird females normally lay 2 eggs, and they are responsible for incubating and raising young pigeons.

In the case of the Colareiras Collarejo, the female selects a leaf at heights that could vary between 1 meter of the ground to almost the 2 meters, on which will build the nest. This leaf can be heliconia, palm, or any other plant species that provides a nearly horizontal and stable surface where you can build the nest, in most cases, the nests have another leaf located parallel to it which protects it from The rain. In all cases the nests of this species are constructed within the forest, and as in other species of hummingbirds, in this species, it is the female that is in charge of the construction of the nest, the incubation and the raising of the pigeons.

With this in mind we can determine that we are facing a case of female with extreme color alteration, presenting the coloration of an adult male.

Thanks to the permanent observation, collection of information in the field and its analysis, in the Tinamú Natural Reserve, we are constantly contributing with the dissemination of important data on different aspects of the Natural History of fauna and flora that we have here. And it is precisely these events that strengthen our commitment to continue studying and protecting, as well as disseminating information about our birds, and wildlife in general. 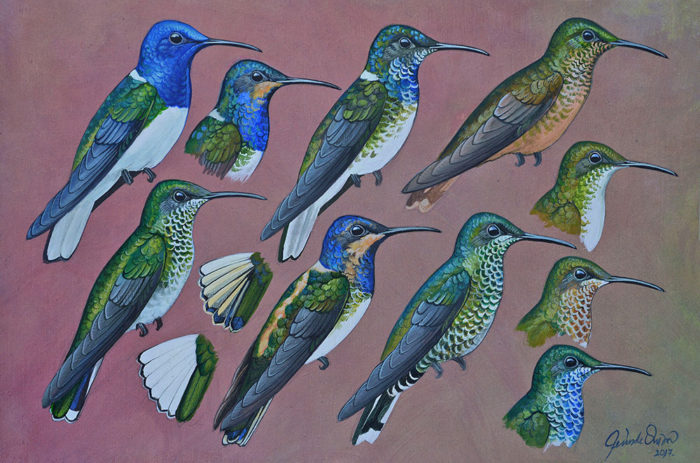 Legend of the illustration:

Inside from left to right:

It is worth noting that color variation and color patterns have almost infinite combinations.