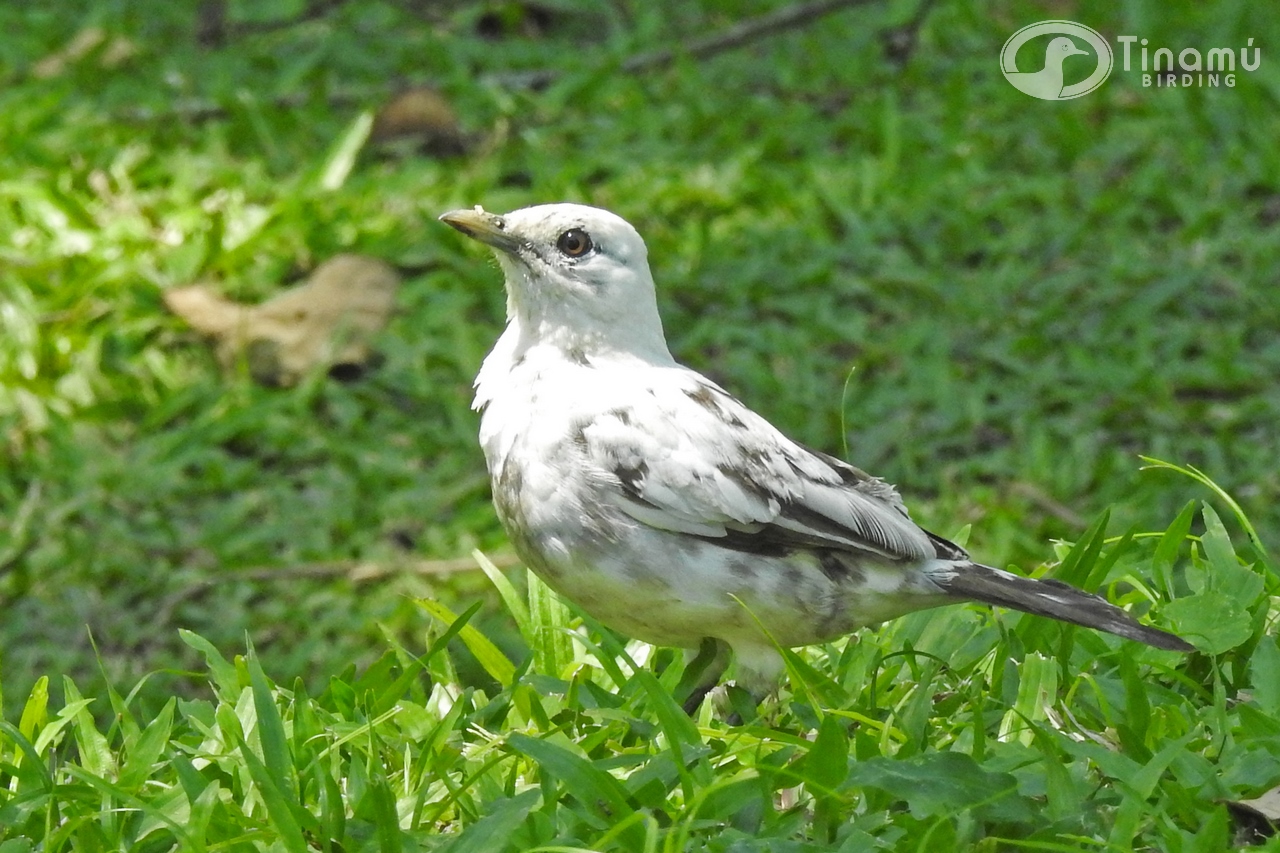 A case of Leucism in Clay-colored Thrush – Turdus grayi in the Tinamú Birding nature reserve was recorded in recent days, the bird surprised birdwatchers who were photographing birds in the feeders around the facilities, after several revisions and keeping in mind that was found next to a Black-billed Thrush, its size, posture and characteristics similar to Clay-colored Thrush could be appreciated.

According to the chromatic aberrations of plumage in birds we quote the information of interest of the ornithological bulletin of Chile:

Melanin is a pigment responsible for giving color and protection to different organs, skin, hair, feathers and iris of the eye (Urán & Cano 2008). There are two types of melanin in birds, eumelanin responsible for dark colors (black and gray) and phaeomelanin responsible for the reddish-brown color (van Grouw 2006). Different types of plumage aberrations have been described, among which are albinism, where individuals have a completely white plumage with red iris due to the total absence of pigmentation (Uieda 2000), melanism caused by the increase of eumelanin or phaeomelanin. that is expressed in a black or brown coloration respectively (van Grouw 2006), the dilution that expresses a pale coloration due to a reduction in the concentration of pigment (Buckley 1982), schizocroism represented by the absence of eumelanin or phaeomelanin, when the eumelanin dark colors will disappear or decrease what is called phaeo schizocroism, on the contrary if missing the phaeomelanin will lack reddish-brown color that is mentioned as gray schizocroism (van Grouw 2006); and finally the leucismo in which the individuals have white plumage completely or partially and nevertheless conserve the color in the soft parts (Buckley 1982, Nemésio 1999, Acosta-Broche 2007).

Leucism has been attributed to various causes. On the one hand, due to the expression of mutant alleles (Bensch et al., 2000), also due to deviations of gene expression that alter pigmentation in the development of feathers (Möller & Mousseau 2001) and formerly it was believed in a physiological disturbance ( Phillips 1954). According to Buckley (1982), leucism has been incorrectly called partial albinism, where there is a total absence of pigment in some or all of the feathers, but unlike albinism, pigments in other parts of the body such as beak, eyes and legs are not affected.

Different studies have recorded leucistic birds with white plumage in different proportions and in different areas of the body as well as birds with completely white plumage. The percentage of white feathers on the body of an individual with leucism responds essentially to how early the mutation occurs during embryogenesis (Acosta-Broche 2007).